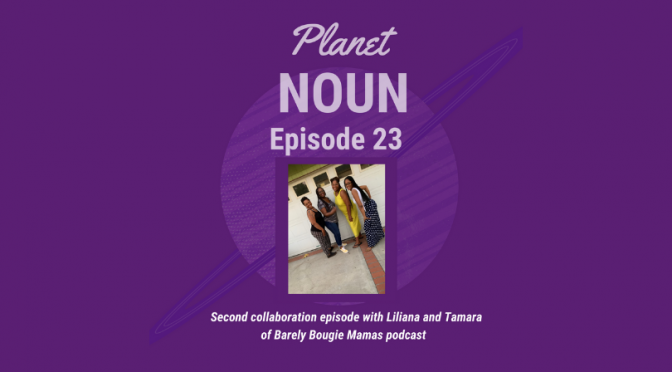 It’s always exciting when a new episode drops…this one is no exception.  It’s the second of two collaboration episodes with Liliana and Tamara of Barely Bougie Mamas—a podcast that was released during the summer.

If you haven’t heard last week’s episode, take a listen after you get through with this one.

So Barely Bougie Mamas is a podcast featuring Liliana and Tamara—two moms who grew up in poverty—but have crafted lives for themselves and their kids that are totally different from their own upbringings…and all of the funnies and concerns that stem from those differences.

My sister Lea and I joined them at Liliana’s home in Southern California for some kiki-ing and questions.

Last week, we talked about some of their experiences growing up vs. how their kids are growing up.

And this week, Liliana, Tamara, My sister Lea and I talk about something Le-Le and I know…being single, childless aunties….And the role all aunties play in the family fabric. Whether they’re linked by bloodlines or play aunties that are for real-real with their care, concern and involvement.

So let’s get to it with the Barely Bougie Mamas and Planet Noun:

03:13—Dealing with annoying comments like “You’re not married? You don’t have kids? And you’re HAPPY?” (Answer: Hell to the yes! Contented, single and childless women do exist, they’re real people)

14:15—Unmarried Aunties, do you realize your importance (and not just for babysitting)?

35:05—Forging the relationship with a potential auntie in your life