Paper wrangling will change your life. I must be honest, I haven’t seen any extreme life-changing effects yet… only in my mind. I’m feeling that tidying magic. It’s even affected how I organize my purchase products while standing in the Target checkout line. 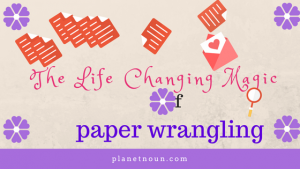 I usually just plunked my stuff on the conveyer belt. But I find myself organizing the simplest things to appear neat and tidy. For example, my few items just had to be organized in a perfect rectangle. Maybe that’s a symptom of an underlying disorder. Maybe not, because that sure hasn’t totally invaded my paper organization just yet.

Keep swimming like Dory… just don’t forget your goal. Click To Tweet
If you haven’t hired an organization expert and are thumbing your way through this book day by day as your real life revolves around you (laundry, grocery/brocery shopping, dishes, cooking, Game of Thrones, Insecure, kicking yourself for just this year realizing how bomb The Wire and Treme really were) here are some tips to keep moving forward. They’re not necessarily gospel, just based on my victories and foibles. 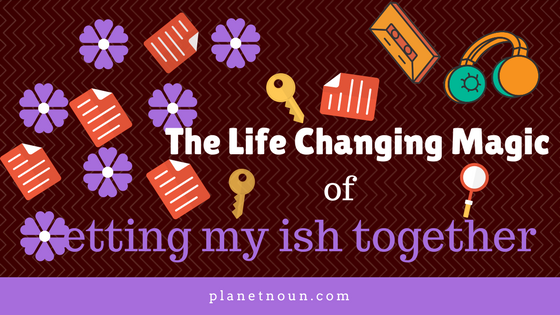 (FROM WHERE I SIT)—Good Lord, the papers have sprouted feet and are taking over because they want to be recycled. This latest rebellion is underway because I’ve been holding things up for way too long.  But I persist, because the end results will be worth it.

Gratefully ditching clothes that didn’t bring me joy wasn’t nearly as hard as getting rid of these clingy papers. It’s been a trudge. Kinda-sorta. Deciding what to keep and what to toss wasn’t that difficult. Now, there’s so much stuff to shred. If only the pile could rip itself to pieces. Yesterday. But as it’s taken me years to accumulate all this shite, it’ll take at least a smidgen of time to get this foolishness back under control.

Such a slow roll. But shredder wheels keep on turning, proud Lizzy keep on burning. I’m encouraged to don’t stop, get-it get-it because there’ll be time enough for resting when the shredding’s done.

Part of my KonMarie possessions laxative includes purging through all papers and only keeping the ones that bring joy. Of course, as The Life Changing Magic of Tidying Up says there are always very necessary papers that must stay, no matter how much they dull the senses. Necessary is necessary.

Some paper goods I’ve considered for the rubbish pile: Treats from students during my teaching days. Every now and then, parents and students blessed me with holiday gifts: Things like a journal, a tile decorated with a little boy’s artwork, a Christmas card made from construction paper, a sporty skirt and top that I wore for a long while before I gave them away. Of all those kind treasures, I still have the journal and use it to jot down recipes. I also have the decorated tile, homemade card, and a different skirt that I still wear during the fall and winter months.

These things still bring me joy. Even the oversized construction-paper card with first-grader penmanship wishing me a Merry Christmas.  I’ll keep them until I can’t keep ’em anymore. Some bring back such wonderful memories. And I’ll treasure them… …. …… …….. .. . always.

there are always very necessary papers that must stay, no matter how much they dull the senses. Click To Tweet

Inch by inch, it’s a cinch. That’s what keeps me from tossing everything out the window. That, and not wanting to catch a littering charge. 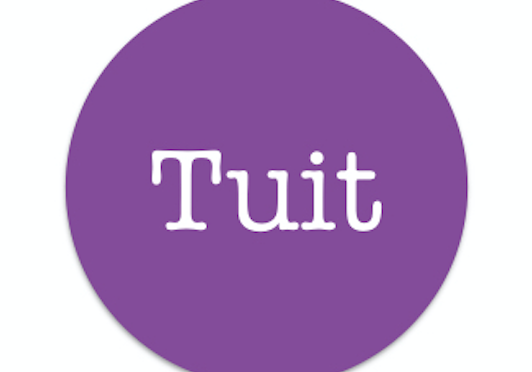 Papers are an itch-bay. They’re all up in everything like sand after a sandstorm.  Not like I’ve been in a sandstorm… But I’ve been stormed by paper for many evers.  That has to change.

Even though I’ve tidied through other possession categories, which you’ll read about as I stumble through this process, I’m still struggling to ditch the papers because my shredder is broke-down and sorry. No, not broken down… broke down. I rode that thing too hard, and it’s trying to quit on me. Another one I have is too dang loud. I swear if I ran that one too long, it would wake the dead.  I’ve been looking for local shredding events, but it seems I missed them earlier this spring. Oh well.

So, according to Marie Kondo, papers should be the first thing to go. I see why. But in my tidying, they’re going to be the first AND last things to go.  That has me scared, because according to the KonMarie method, if you don’t follow her ways perfectly, you’re doomed to failure. [NOTE: Kinda felt like being at some churches.]  I hope that’s not the case.  I know that’s not the case, because this one here (points to self) ain’t going back down that road of clenching and holding on to stuff that doesn’t make her happy or isn’t totally necessary).  No, sir.  No-sireee-Bob (who’s Bob?) Nawsuh. Nunnnt-uhhh.

According to KonMarie, paper includes books. At first, I thought it only meant the bags and boxes of foolishness I’d been keeping for YEARS with plans to file, but just never got around to it.

Now I have one.

Corny, I know. But no more excuses.

So here’s something else that’s helping me get my paper -ish together.  I refused to purchase any more stuff to organize my life. What purpose would it serve to buy more organizers?  This one here (points to self) already had all she needed and hadn’t yet put to use.

A personal, physical “in” box that took everything in but never put out? Got it.

Adorable Ikea organizers? Got-em!  These Skubb organizers are inexpensive, well-loved (by me) and well-used.  Not the most fancy-schmancy, but they get the job done.  If ever get more organizers it would be these exact ones or something like them. So versatile. And foldable. If I don’t need them, there’s a zipper on the bottom which makes them easy to break down and store without taking up goo-gobs of space.

Since I’m ditching stuff, it doesn’t make one iota of sense to go collecting more organizers before I’m through getting rid what I don’t need. Instead, I’m choosing to release stuff that doesn’t bring joy and will to use organizers I already have to tidy what I still want to keep.  And if I have leftover organizers, those may have to say hello to Salvation Army or any good friend who could use them.

Can I tell you how many books I hauled outta here?

Nope, because I didn’t count them.  But it was several boxes and plastic containers full.  Some were hauled to a local used bookstore where I could exchange for cash or credit.  I’m sure some bibliophile somewhere already knows this, but opting for store credit gets you more value than cash.  Since I was looking to get rid of stuff, it didn’t make sense to take store credit and welcome more books into my life while choosing to keep ones that I still wanted to read, but hadn’t since I didn’t have a precious Tuit.

For me, it was wiser to take the value cut and keep the cash.

Now, I have a tall bookcase full and one plastic container of books that I haven’t yet put back on my other smaller bookcases.  I’m thinking about giving these things another go-through.  Some may not make the next cut. My gut tells me the volumes I really need and will use can fit on the one tall case.  All others can visit via electronic means, and if I crave the more intimate feel of pages on fingers…there’s always the local library.