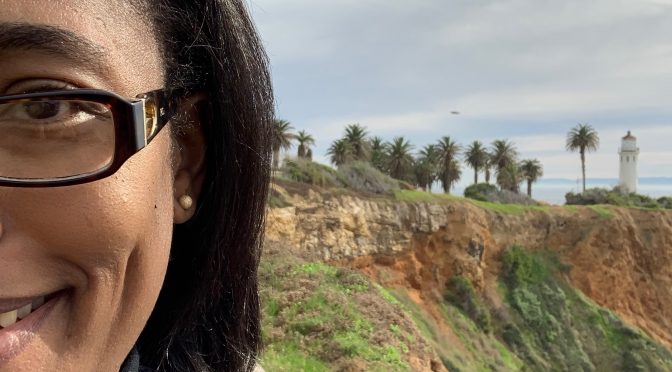 Somehow, I don’t quite know how, a book about the Palos Verdes Peninsula titled “Time and the Terraced Land” ended up in my hands. Actually, I think it ended up in my dad’s possession when he made a visit to a brick-a-brack store when I was a teenager, I think. As an adult, I kind of lifted it from him to get more information about one of my favorite places on the planet.

If you don’t know where the Palos Verdes Peninsula is located, it’s in Los Angeles County, Calif., past Torrance and near San Pedro, Calif.

It juts out, as peninsulas are wont to do, in the Pacific, gifting folks with extraordinarily beautiful views—especially on clear days. This particular Sunday wasn’t the clearest one, but the beauty was still extraordinary…and enough where a healthy crop of people came out to enjoy the vistas.

This land has had plenty of visits from me—from peaceful, scenic drives, to stops by the interpretive center just near the Point Vicente Lighthouse, and pauses along the pathways there to listen to the waves.

On this particular trip, I parked my rental car and walked toward the fence separating walkers, joggers and whale watchers from a precarious fall.

A kind man named Desmond started telling me about some seals perched on a rock near the shore. He had some really super duper binoculars and he shared some of his views with me—along with a snippet of his story…see, his wife was with one of his granddaughters. And they were at the Point Vicente Interpretive Center.

In the mean time, I found out this man (hadn’t asked his name just yet) had traveled the world with the Navy, so he tells me, and was on this day out spotting sea life like dolphins (he let me look at a pod traveling north) in addition to the seals.

He also told me that he and his wife did things differently—formerly living in a boat in the area—and that they both love to travel and she, at the tender age of 52, he tells me, decided to become a flight attendant, which fell in line with their love for travel.

Folks had gathered there to see if they could be party, visually speaking, to migrating whale pods that move along the California shoreline during the winter months. While we didn’t have any luck with whale sightings, there was that group of dolphins we saw. Desmond engaged others who happened upon our little section of the fence, and then I noticed the group gradually grow larger as folks learned dolphins had been spotted out yonder. One of the dudes who was there with another lady and a dog estimated about 100 dolphins were swimming and leaping with the group.

After meeting Desmond’s wife and lively granddaughter, I decided to take a walk through the interpretive center. It had been some years since my last visit.

The center tells the story of the Palos Verdes Peninsula from prehistoric times and the indigenous people who resided there, to the era of the Ranchos in Alta California, to the history of Japanese Americans there, and the era of Marine Land, a marine zoo (akin to Sea World) which closed in the late 1980s, to the Fresnel lens of the Point Vicente Lighthouse which is on display courtesy of the US Coast Guard.

Whaling was also big business back in the day, and there’s a whaling boat as well as a display of an array of products used throughout the years that relied on parts of Baleen Whales in order to produce. From soap to toothbrushes, clothespins, and oils for various purposes.

The center also explains the dynamic nature of the peninsula, and the constant, albeit slow, movement of earth in the Portuguese Bend landslide area. The Bend is part of one of my favorite scenic routes ever, and I like to drive it when I can—just to see how the roads have changed and how much new road patching has been necessary to repair bumps and cracks that inevitably develop due to the constant movement of the earth there.

Another cool thing about the PV Interpretive Center—the awesome walking trails overlooking the ocean with a cool view of Catalina Island. That actually was two things…and the third? It’s FREE! Nothing better than the opportunity to experience grand views and learn something new for $Free.99!

That interaction was quite nice and refreshing, and here are some images from that day, as well as one of the view through Desmond’s binoculars: