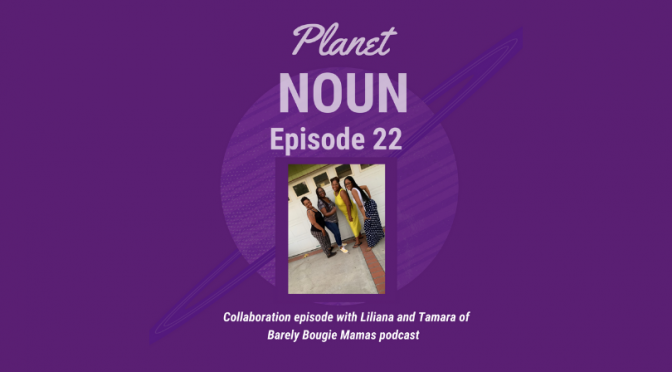 I’m always excited when a new episode comes out…this one is no exception.  It’s one of two back-to-back collaboration episodes we’re dropping today and next Thursday. Planet Noun’s first collaboration ever—and it’s with Liliana and Tamara of Barely Bougie Mamas—a podcast that was released during the summer..

A capsule-sized explanation of their show—it’s about two moms who grew up in poverty—but have crafted lives for themselves and their kids that are totally different from their own upbringings…and all of the funnies and concerns that stem from those differences.

My sister Lea and I joined them at Liliana’s home in Southern California for some ki-ki-ing and questions.

A little background…Tamara and I met the afternoon this was recorded…But she’s listened to some Planet Noun episodes, and I’ve listened to Barely Bougie Mamas shows.

Liliana and I grew up together. My sis and I have known her for years.  Matter of fact, we go so far back, I don’t remember WHEN we met.  My mom says it was at church when we were wee children who were sat in the class for babies, toddlers and under fivers. We used to sit next to each other and suck our thumbs, mom said.

That’s enough intro!  There’s cussing in this episode. You’ve been warned…now listen in!

1:32 — How Tamara and Liliana met, then  learned they had things in common

41:55—Whose kids are more bougie?  Tear-jerking experiences with their children

51:13—What to expect from Barely Bougie Mamas podcast

Listen to Liliana and Tamara, the Barely Bougie Mamas, on Anchor FM